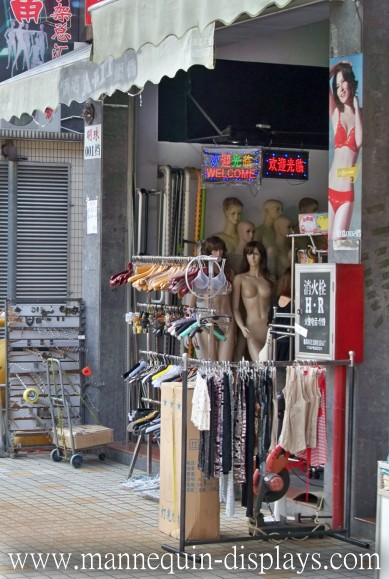 It is no secret that a large percentage of mannequins are sourced in China nowadays. Because of the relatively low wages in china, chinese manufacturers and exporters of mannequins were able to offer their mannequins at extremely low prices for an extended period of time. Despite the sometimes questionable quality of these display dummies, their competetive price was the reason these mannequins sold relatively well in the european and american markets.

On a recent field trip to china, i obviously also used the chance to check the actual street prices of retail mannequins, store racks aswell as store fixtures and was quite surprised that despite an unchanged quality, the asking price for entry level mannequins rose to above 80 Euros nearly everywhere. In my opinion, these elevated prices reflect the higher asking prices by chinese manufacturers, which have to compensate for higher wages demanded by their workforce. It remains to be seen in the coming years how importers from the European Union and the USA will react to these rising prices. At this stage, my guess is that the trade flows will adjust and the demand is going to switch to alternative sourcing locations. With wages in parts of eastern europe already lower than in the costal regions of china, it might make more sense to produce mannequins in these parts of the world, partly also because they are nearer to the prospective customers, reducing transportation costs.

If you are looking for suitable wigs to equip your mannequins, we recommend wigs-direct.com, an online retailer with a great assortment of wigs.
This website uses cookies to improve your experience. We'll assume you're ok with this, if you continue. Accept Read More
Privacy & Cookies Policy